There is so much to experience when you visit Lisbon, the capital city of Portugal. This fantastic coastal city is filled with historic buildings, delicious eateries, and must-see attractions.

Bring your sense of adventure and hit the streets of Lisbon to check out these 7 must-see attractions while you are visiting. Many of these places are popular so you will probably want to get your tickets ahead of time to skip the long lines.

Discover the heritage and culture of Lisbon while wandering through this historic city. Explore the narrow, winding streets of old town, walk along the riverbank promenade, or breathe in the fresh air while relaxing in a park.

Before hitting the streets and searching out fascinating sites, drop your bags at a Lisbon luggage storage facility for safekeeping. Then you can take your time to check out these must-see attractions in Lisbon without parcels and backpacks weighing you down.

One of the biggest aquariums in the world is right in the heart of Lisbon in the Parque das Nacöes area. This is definitely a family-friendly place to visit, but also great for adults to enjoy without children. Get your tickets early so you are not waiting in line.

Home to marine animals and several different bird species, you can easily spend the day roaming through the aquarium. Visit the Antarctic, Atlantic, Indian, and Pacific oceans and see the various sea creatures that can be found in each habitat.

Visit the central tank filled with beautiful rays, sunfish, and even sharks. While here, watch the sea dragon as it gracefully moves through its smaller aquarium or watch the clownfish and learn exactly why they were given such a humorous name.

The crown jewel that sits atop a hill overlooking Lisbon is the Castelo de São Jorge and is one of the most popular tourist spots in the city. Nab your tickets online to ensure you actually get to go inside this impressive castle.

Stroll through the museum and check out some of the amazing archaeological finds that have been discovered in and around the castle. Wander over to the battlements and stare off into the distance or head up into one of the towers for great photos of the city.

While it is not the original castle that stood on the grounds, the first one dates back to the 1100s when the Moors occupied the lands. The Alácova Palace was built when Afonso Henriques defeated the Moors.

The original castle’s foundations are part of the archaeological excavations that are taking place on the property of Castelo de São Jorge. 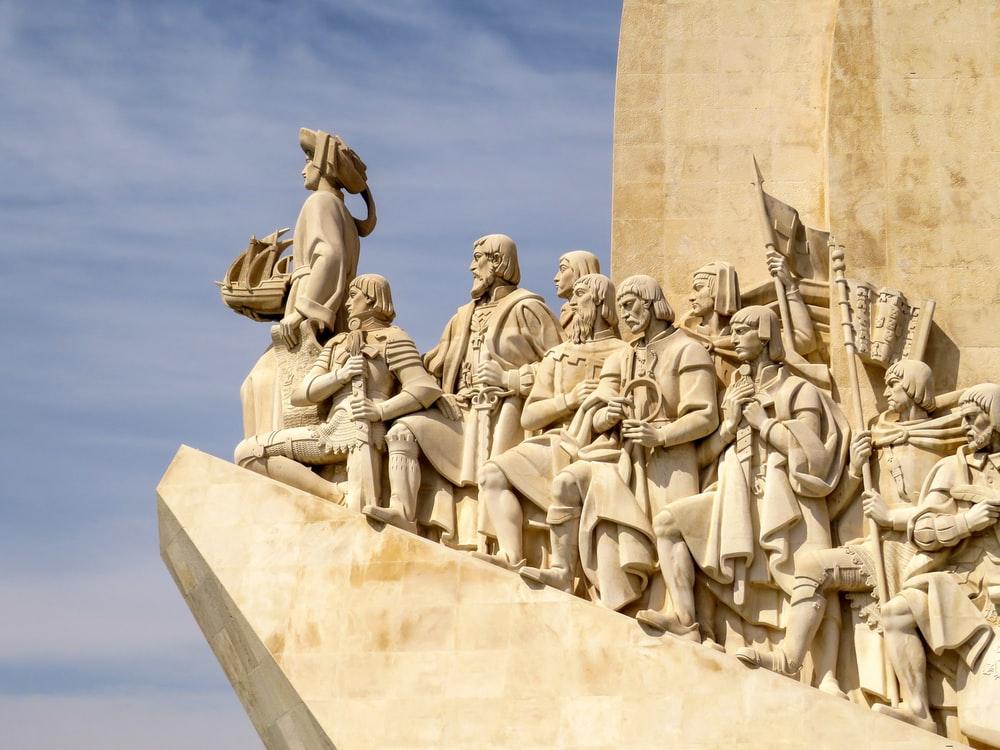 This unique, angular monument pays homage to the Age of Discovery and sits on the Belém waterfront. Many people stroll by the monument without really understanding the significance of the design.

The angular monument was constructed in 1960 as a way to commemorate the anniversary of the death of Henry the Navigator in 1460. Part of the monument leans out over the Tagus River and resembles the prow of a Portuguese navigator ship.

The statues found beside the Padrão dos Descobrimentos are of prominent men who were an integral part of the Age of Discovery including Pedro Álves Cabral, Casco da Gama, and Fernão de Magalhães.

Go up to the monument for a fantastic view of the Tagus River and parts of the city’s riverfront.

An absolute must-see when visiting Lisbon, the Museu Nacional de Arte Antiga is home to one of the biggest collections of 15th and 16th-century Portuguese paintings. There are three levels to explore and it will take you a few hours to see everything.

Be sure to start your tour at St. Albert Chapel, the remaining portion of the St. Albert Carmelite Monastery ruined during the 1755 earthquake that shattered the city. The art museum sits where the monastery was located.

Be sure to check out the 17th-century Indian casket that is crafted in silver as well as tapestries, furniture, textiles, and jewelry. The painting Virgin and Child with Saints by Hans Holbein the Elder is displayed here and dates back to 1519.

Book your visit online before heading over to the museum and choose either a guided or self-guided tour.

Come see one of the oldest churches in Lisbon, the Igreja do Carmo, or at least the skeletal remains of the church. Built between 1389 and 1423, at one time this was the most distinguished church in the city.

Visitors today can wander through the open nave and view the arches that did survive the quake. The chancel has been converted into the Museu Arqueológico do Carmo or the Archaeological Museum of Carmo.

Located in the Baixa district of downtown Lisbon, the Elevador de Santa Justa is a neo-Gothic styled elevator that is really a must-see when in Lisbon. The wrought iron design is a formidable thing to see but it is a very popular tourist attraction.

The elevator was opened in 1901 as a quick way to get from Baixa to Bairro Alto, an up-and-coming neighborhood. Today, it is a great viewing platform with amazing views of downtown Lisbon.

Because it is such a popular tourist destination, the lines are long to go up into the Elevador de Santa Justa. Tickets are not available online; you just have to take your chances and plan to spend some time standing in line.

One of the most recognizable sites in Lisbon is the Torre de Belém, a historical monument located near the mouth of the Tagus River. The tower was constructed during the 16th century during the Age of Discovery.

The tower was originally to be a fortress that sat in the middle of the Tagus River, now it is a great tourist attraction where you can climb up a spiral staircase to the top terrace for breathtaking views of the river and city.

Check out Manuel I’s royal coat of arms and the King’s Chamber located on the second floor. Be sure to get your tickets online for this amazing UNESCO World Heritage Site.

Lisbon is a city with unique attractions that can only leave you wanting to see more. Explore the places we’ve suggested, and make plans to come back and see even more sights next time!