Utilized endlessly within the entertainment and advertising industries, fake money has been one of the greatest illusions of the last 20 years. Whether you have watched “The Wolf of Wall Street” or seen pretty much any rapper’s music video, then you will be surprised to know that the money is not real. It is fabricated and made to look realistic.

The increase in prop money being utilized by movie companies, television producers, music stars and even theatre companies has led to an increase in the number of companies that create this money and a much greater quality product as a result.

This article looks to not only give you the 5 best companies that you can get this money if you need it as a prop, but will also share with you 5 ways in which it can be used and will look to address the obvious questions of “how is it made?” and “can I use it to buy real things?”

How is it made? Can I use it like normal money? 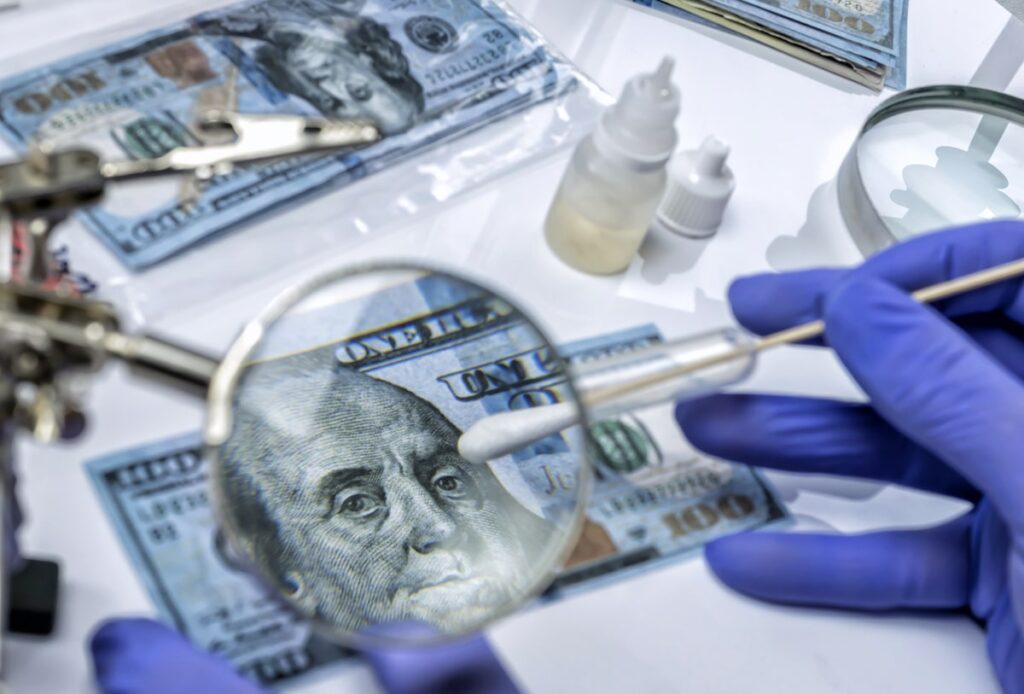 Different companies have differing ways of making their fake money, one of the most famous prop money makers in the world, who has provided the highest quality prop money for Hollywood movies and music videos, is Rich ‘RJ’ Rappaport. He says that they use the highest quality paper and work with all of the finest details to ensure that their money looks the best.

There are two types of prop money, there is standard grade prop money, which is printed on both sides but serves only as an illusion, because when you get closer, you can see the note change and it becomes clear that it is fake. This grade is often used when prop money is being used at a distance so that the audience does not know the difference.

Secondly, there is high grade prop money, it is optimized for close up scenes and looks very realistic, but Rappaport says that they can “only print it on one side, so that they do not encounter trouble for making illegal money. This leads into the second question, no, you cannot use prop money to buy real items, mainly because even the best prop money is printed only on one side. Any companies found to be printing illegal prop money that is realistic and double sided will always be shut down and prosecuted.

5 scenarios in which prop money is used 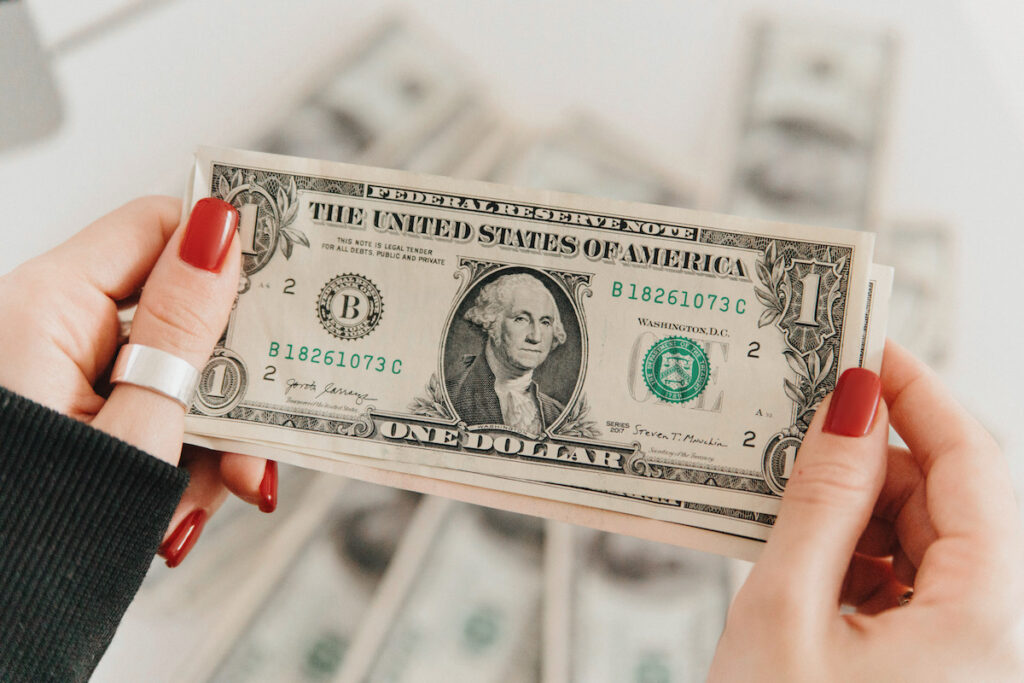 You would be surprised at the amount of YouTube creators utilize fake money for effect in their videos. One particularly prominent video type in which fake money is used is in prank videos or social experiment videos. A common fake money method is having a realistic fake on top and on the bottom of a stack and then having blank sheets in the middle that are the same shape and size of notes.

The Movie and TV Industry

The reason behind many movies and TV programs using fake money is because under the law, you are forbidden to intentionally mutilate, cut, burn, or destroy and bank bill, bank draft or bank note. This means that even if a movie can afford to destroy money for effect, it must be fake money or else the producers and those that allow it will face fines and imprisonment. TV shows must do the same, however they more often utilize the blank paper method as a means to provide the illusion of fake money. 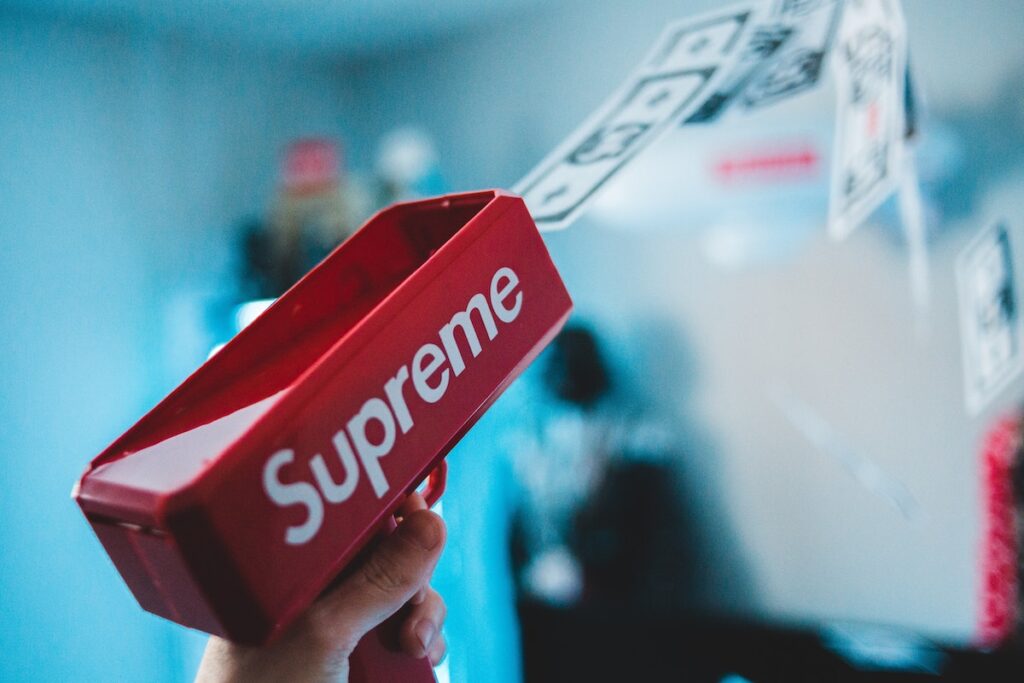 Often, if money is not being destroyed, music videos will usually feature real money, however, prop money has become more popular, especially on the rap scene where artists look to show off how rich they are and use fake money for effect. Similarly, any destroying or reference to destroying money within the videos is forbidden unless it is fake money, so it is used for that purpose also.

While not used as heavily, the fashion industry does also utilize prop money for photoshoots or advertising campaigns.

Education and Board Games 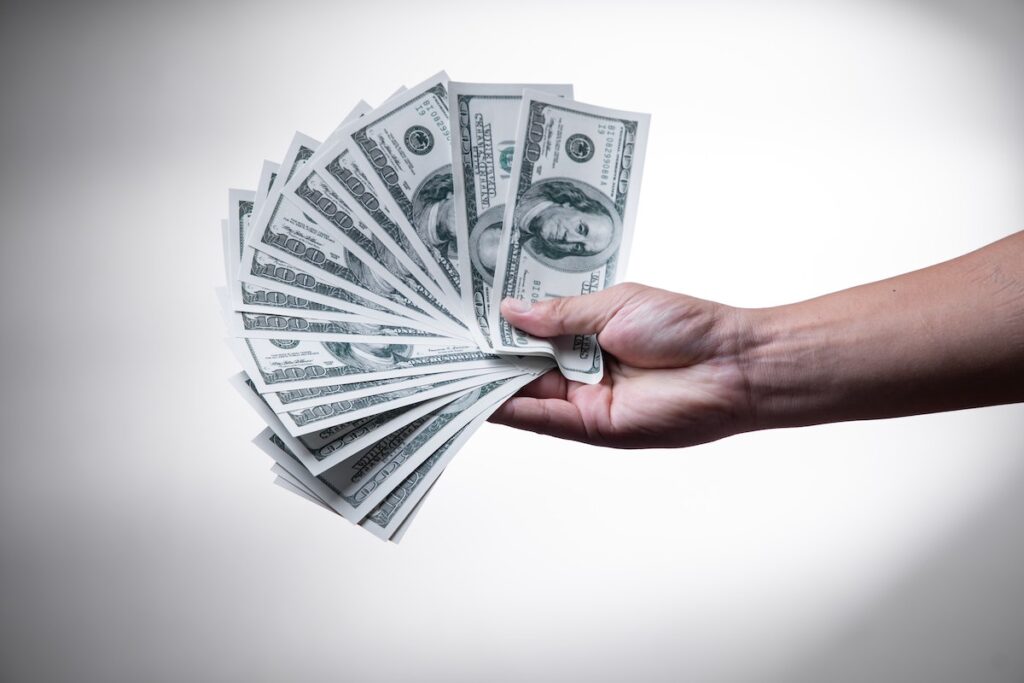 The use of fake money to teach kids about different bank notes has become more popular because kids can handle them, and you won’t have to worry about how clean or hygienic the note may be. Similarly, board games have used fake money for years and continue to utilize it. 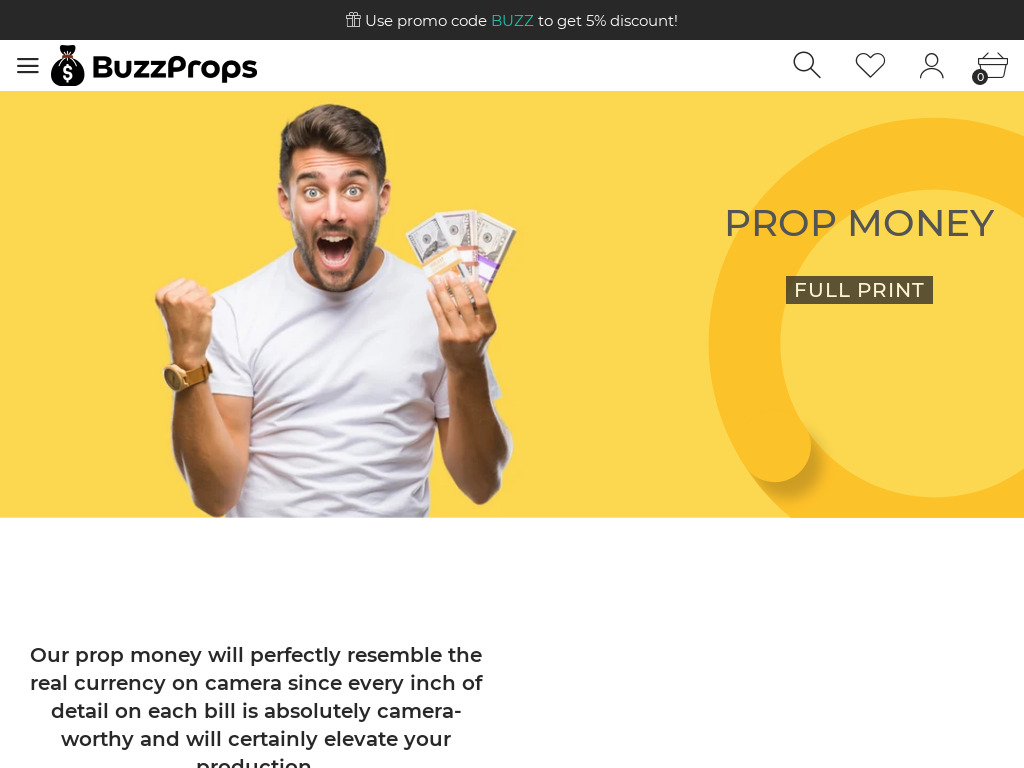 One of the most versatile and highly regarded fake money creators in the industry is Buzzprops, they have worked with world famous companies like Netflix, HBO, and Warner Bros to name but a few and have a high standard within their work, creating excellent replicas for a variety of currencies that have been used in music videos and movies alike. They are made in the USA and they accept payment via card or PayPal.

What I like most about Buzzprops is that they provide the same quality at any price, meaning that even if you have a lower budget for a video or movie, they still provide more affordable stacks. Their customer service line is very competent, and their design, quality and shipping times are all above average. They regularly run sales and if you use the code BUZZ, you get 5% off! 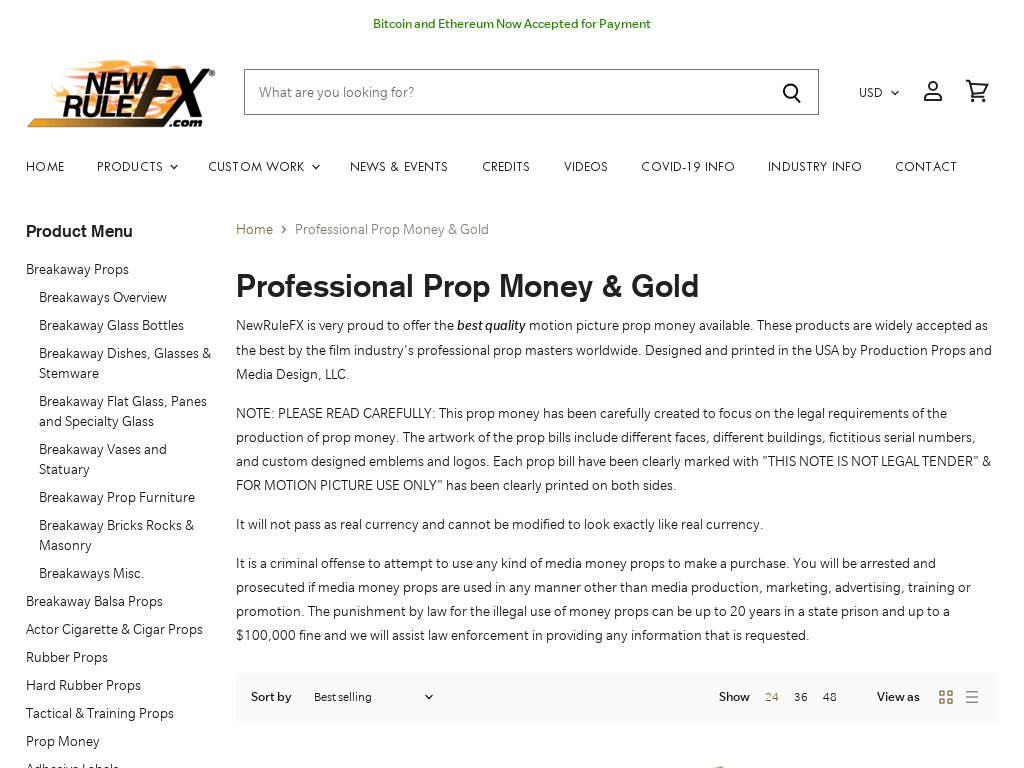 One of the easiest to use services to purchase not just fake notes but even fake coins is New Rule FX. They have been a popular choice for movie and theatre companies for years and offer a solid price point for their work. They maintain that their cash creation is all completely legal and regularly have checks with the federal agency to ensure that they are within the rules, so you can rest assured that their quality and legitimacy are at the forefront of their business. They also sell a host of other props, like prop weapons and glasses, all of which are well priced and hugely popular. 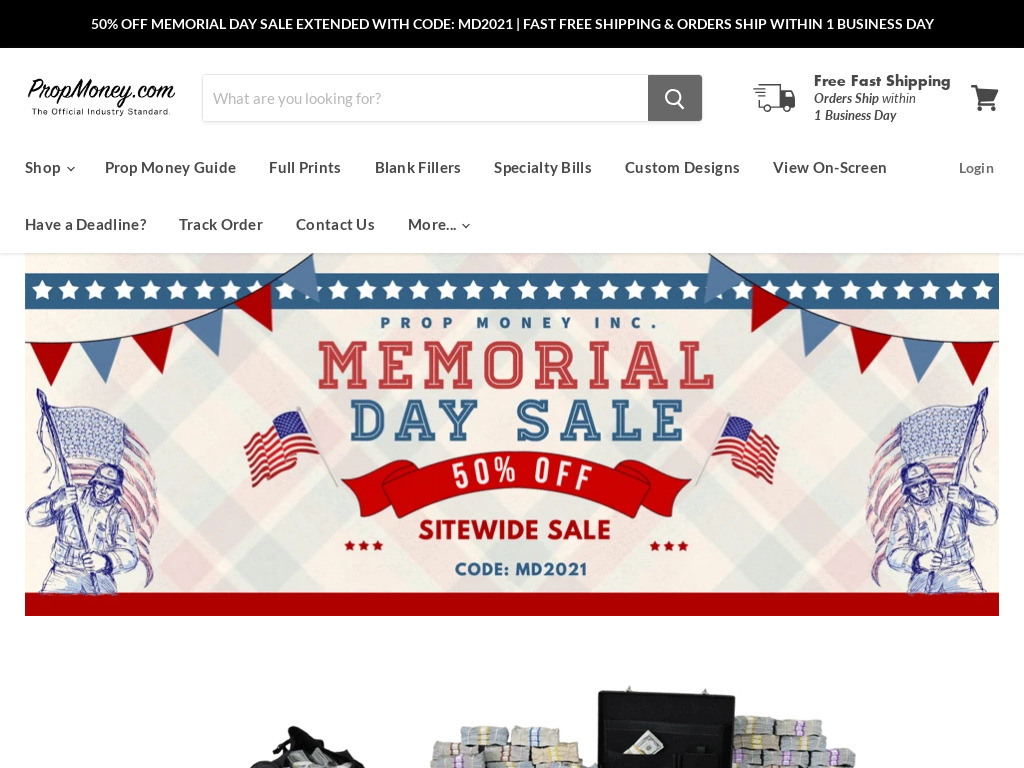 As the name suggests, this company specializes in one thing, making fake money. In terms of what they offer, I would say that they offer the best variety of money types. Here you can buy double sided money, stacks, aged money and even money palettes, hitting every area that any movie producer or video maker could need. They abide by all laws and offer free shipping to all US customers. One thing that should be noted is that due to the popularity of the site, items can sell out fast so beware. 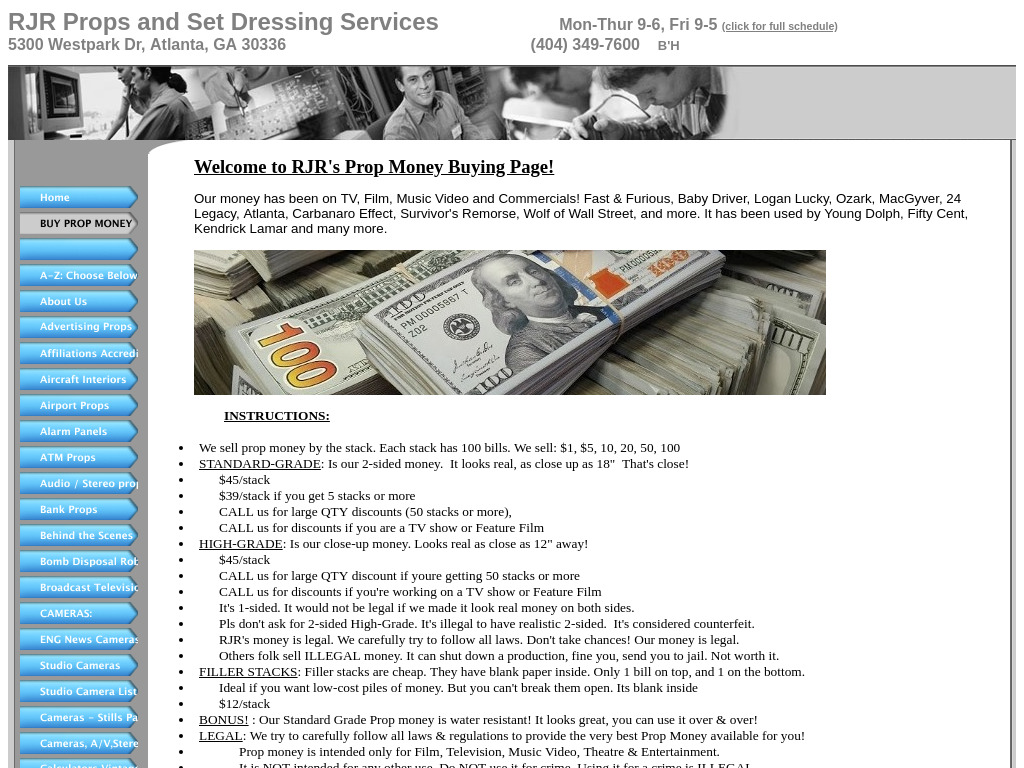 With franchises like Fast and Furious and Ozark in its portfolio, you already know that RJR props is the real deal. Run by RJ Rappaport who I spoke of earlier, they provide both standard grade and high-grade notes and stacks, with $1 variations up to $100 variations.

Prices are on the expensive side, with a regular grade stack costing $45, a high-grade stack costing $65 and a worn stack costing $85 you will have to pay big money, but the prop money is made with the best care and the best precision in the business. If I had one downside, it would be the website itself, I found it to be a little slow and old-fashioned, but the service itself and the props that they provide are second to none. They also provide prop living areas and vehicles too if you are looking! 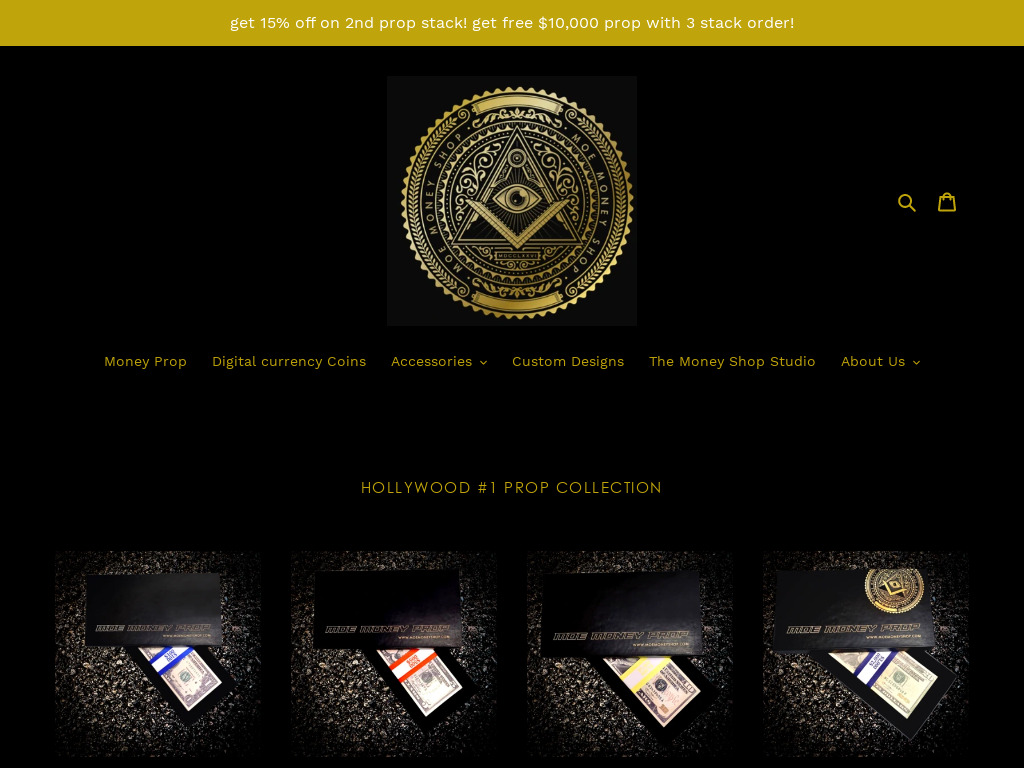 For music videos, Moe Money Shop is one of the best services that you can utilize, purely for the level of customization it offers. A lot of rappers use this service because you have the option to put your face on the note instead of Benjamin Franklin’s face and their money gun will let you “make it rain” for as long as your heart desires.

Their prices are reasonable, and they even have their own studio now where you can shoot your music video and use their prop money as well! If you want the best value, then there are other services that can do it better, but in terms of customization, there are few services that can better MMS.